A Lady of Persuasion is in stores today! This is the third and final installment in the trilogy that began with Goddess of the Hunt and continued in Surrender of a Siren.  It’s the story of Toby and Isabel’s romance, but it’s also a happy ending for an entire group of friends, both old and new.  And who better to celebrate that with than you–my friends, both old and new?

You see, when I started writing Goddess of the Hunt, I had this thought that it should feel a bit like the TV show Friends, only set in the Regency.  A group of…well, friends…who are at that time in their lives where they’re figuring out their futures and pairing off, who know each other well enough to throw around a lot of witty set-downs and the occasional incisive remark.  A group of people who genuinely care about one another, even though they’d sometimes rather not admit it.  And it was just so much fun, to write Henry, Toby, Felix, and Jeremy giving each other sh*t in the way guys do. 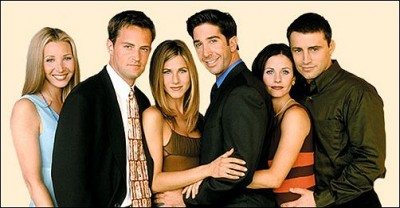 There are several sections of A Lady of Persuasion where the main characters from all three books are together–sometimes for pleasant reasons, and sometimes not.  Don’t get me wrong–I adored Toby and Bel as a couple, and their journey to love was a pure joy to write.  But those ensemble scenes were a unique pleasure, because I really believed each of the three (… Read More »

Woohooo!! At long, LONG last, it is the official release day of Goddess of the Hunt. I am tempted to go into a long, sappy speech thanking everyone I’ve ever met – but truthfully, it’s 1 AM over here and I’m dead tired! That speech will have to wait. (Plus, it’s in the Acknowledgments. See page 361.)

I do want to tell you about some fun stuff I’m doing today to celebrate. And as with any good party, there are prizes involved!

I’ll be guest-blogging today at Romance Vagabonds about the timely topic of friendship–both in romance novels and behind-the-scenes of their creation. The post isn’t live yet as I write this, but I understand there will be prizes up for grabs!

The lovely Vauxhall Vixens also threw me a virtual surprise party to celebrate the release. If you want to read the words of overly generous friends saying completely gushy things about me, by all means, click over.

And last but not least, over at Courtney Milan‘s blog, she explains the day-long Goddess of the Hunt Twitter Talk contest. She’s giving away copies of my book, as well as some of the other fabulous historicals releasing today. All you have to do is get on twitter, use the hashtag #tessadare, and make patently outrageous assertions about GOTH and/or its characters. Elyssa Papa takes an early lead with this hilarious pic of President Obama holding “GotH”. See Courtney’s blog for specifics.

And somewhere in there, if you … Read More »

Whew. Why did I think I’d be able to blog from RWA National Conference? I don’t think I even cracked open the laptop but once. It was iphone or nothing. But anyway, I am finally home and had such a great time. This was my first conference as a really, truly, almost-all-grownup author! And it ROCKED.

The fun started Wednesday with the Eloisa James/Julia Quinn Bulletin Board get-together, catered by the amazing Kim Castillo (we were enjoying the cookies of her labor all week). Later that day, I had my first-ever book signing at the RWA Readers for Life literacy benefit. I only had about 15 copies there, and they were all gone within minutes, thanks to my wonderful friends. I can’t tell you how touching it was to see people I’ve “known” online for three years show up with hugs and misty eyes to support the release of GODDESS OF THE HUNT. I am so blessed with a wonderful network of friendship and support.

Thursday started with breakfast with my roomies Courtney Milan and Carey Baldwin, plus…oh…a dozen? of the historical romance genre’s most esteemed authors. Oh my stars – Joanna Bourne, Sherry Thomas, Mary Jo Putney, and several more – all before I’d had my coffee. I may have dreamed it.

Courtney Milan stole the blog post from my fingertips this morning. Huge squees of joy are in order for two more friends who have made their first sales: Maggie Robinson, who recently sold to Berkley Heat, and Tiffany Chalmers, who just sold this week to St. Martin’s Press! Congratulations, ladies! I can’t wait to find Paradise and Hidden Beauty on shelves in 2010!

As Courtney points out in her great post, Maggie and Tiff are just two more successes from the amazing circle of friendship and support that grew out of the 2006 Avon Fanlit event and the Eloisa James Bulletin Board. (Now also Julia Quinn’s BB!) Courtney does a great job of discussing how that network has led to success – through various friendships, critique relationships, and sub-groups, many of us have gone on to complete manuscripts, land agents, and sell.

But another thing many of us have had in common? The advice and critique prowess of Ms. Courtney Milan. Which is why her critique up for bids in the Brenda Novak Auction to benefit diabetes research just may be the steal of a century.

There’s no way I could have completed or sold Goddess of the Hunt without my critique partners, one of whom is Courtney Milan. Her comments on my manuscripts have always been insightful, useful, and unfailingly honest. And her expertise in legal matters is unparalleled. If you’re an aspiring author of historical romance, I don’t think you could spend your money … Read More »

I’ve been sitting on the news for a little bit…but whoops, it hatched! I’ve already had a few friends email me to say my new book deal with Ballantine made Publisher’s Marketplace today. Here are the deets. (Okay, they’re super-vague deets, which may make them something other than deets, but here goes.)

Tessa Dare’s next three historical romances (tentatively titled the Stud Club trilogy), in which a duke, a warrior, and a scoundrel are united by chance, divided by suspicion, and brought to their knees by love, to Kate Collins at Ballantine, for publication in 2010, by Helen Breitwieser at Cornerstone Literary (world).

Suffice it to say, I’m floating on air and feeling very warmly toward my agent, my editor, my CPs, my friends, my family, everyone at Ballantine, strangers passing in the street… I’m in love with love right now, but most especially with Spencer, Amelia, Rhys, Meredith, Julian and Lily…all of whom you will meet in mid-2010!

Holy smokes, I have to get writing.

Talk about it all you want!
ETA: The heroes are all studs of course, but before anyone starts freaking out about anachronistic slang in historicals, the stud in “Stud Club” refers to a horse.

(Side note: Do you know, I get many, many hits a day on this post, from people googling “Brad Pitt Fight Club”? If you want to increase your internet traffic, I highly recommend working those … Read More »

You probably think I’m talking about the inauguration.  Yes, that too!  I’ll be forcing the darelings to watch it with me, no matter how they plead for Spongebob instead, and they are going to be completely bored and have no idea what the big deal is – and that is awesome.  Now we just have to deal with the question my eldest burst out with yesterday evening, in the middle of the Lakers game: “Hey!  How come there are no girls?”

But it’s a happy day in the Dare household for yet another reason: 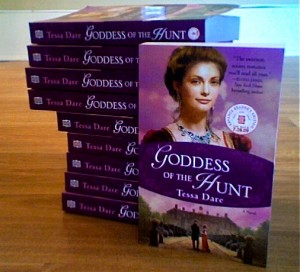 Yes, my ARCs arrived!  But…there are ten of them.  Ten.  Don’t they know I need at least 200?  Ack.  I’m not sure what I’ll be doing with them, but for the moment I’m holding my preciouses close and just staring at them a lot.  Okay, and fondling them, but we won’t talk about that. 🙂

Hope it’s a happy day for you all as well!… Read More »

I hope you all had lovely holidays!  We certainly did at the Dare residence.  This was the first year that both darelings were really old enough to get excited about Christmas and Santa (who did not disappoint!), and we all had a wonderful time with Grandma and Grandpa Dare, despite passing around a nasty cold.

My own exciting news: As of today, all three of my books are available for pre-order on Amazon!  Here are links to Goddess of the Hunt, Surrender of a Siren, and A Lady of Persuasion.  (I just have to stop once again and marvel at the fact that I actually got to keep my books’ original titles!  How often does that happen?) Over the holidays, I completed my copy edits on SIREN, and now it’s back to working on Stud Club while I wait for book three edits.

Everyone’s talking and blogging about New Year’s resolutions this week, it seems.  Well, 2009 is going to be a busy year for me.  I have three novels and one e-book novella releasing.  I plan to complete at least 2-3 more new books.  I’m serving on the board of my local RWA chapter, and I’ll be sending my … Read More » 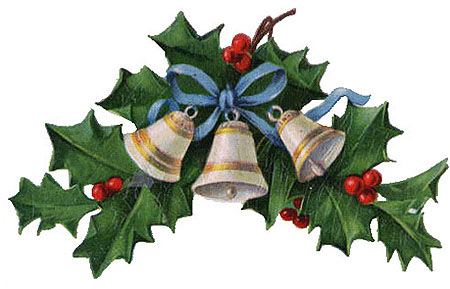 The blog will be on holiday for a few weeks, as the Dare family gathers ’round to celebrate Christmas and New Year’s.  Grandma and Grandpa Dare will be arriving for a visit, to the delight of all.  The darelings are all aflutter with excitement for Santa’s arrival.  And I got the lovely Christmas gift of copy edits for SURRENDER OF A SIREN, which I must complete before the year’s out.  It’s appropriate, because SURRENDER is the only of the three books which actually includes a Christmas!

Oh, and I’ve seen the mockup for that cover…it’s beautiful!  And I still can’t show it to you. 🙂

One of my New Year’s Resolutions will be to be a more consistent blogger.  But until then, I wish you all a very Happy Hannukah, Merry Christmas, Happy New Year, and more!… Read More »

Wishing you all a lovely holiday with your families and friends, safe travel, and good fortune at the malls!

The Dare family will be laying low this weekend–Mr. Dare is working the holiday (someone has to, and we luvs that holiday overtime pay), and I just received my copy edits on Goddess, which will keep me busy.  I am thankful that they look pretty minimal!

As a family, we have much to be thankful for this year and every year.  But as a writer, I am especially thankful for all of you, my wonderful friends who come visit this blog and give me your support and encouragement.  I can’t imagine muddling through this process alone in the dark–for one thing, it wouldn’t be half so fun.  For another, I’d be banging my head against a lot more walls.  🙂  Thank you, thank you, all of you!

Okay, I know the world is abuzz with exciting news, but this is my own little tiny piece of excitement.

My first book, Goddess of the Hunt, is now listed on Amazon!  It’s not available for pre-order quite yet, but imagine it will be soon. You can pre-order it now!  Hooray!

Actually, you can already pre-order it from the Random House site here.