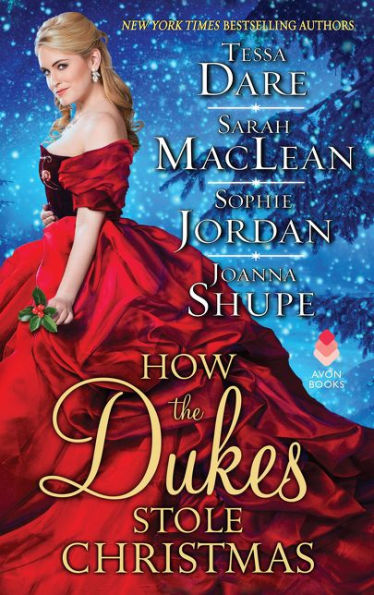 How the Dukes Stole Christmas
A Christmas romance anthology

Now available as a mass-market paperback, just in time for the  holiday season!

“Meet Me in Mayfair” by Tessa Dare
Louisa Ward needs a Christmas miracle. Unless she catches a wealthy husband at the ball tonight, the horrid, heartless Duke of Thorndale will evict her family from their beloved Mayfair home. But when her friend begs to switch dance cards, Louisa finds herself waltzing with the enemy: the horrid, heartless–and unexpectedly handsome–Thorndale himself. Now the duke’s holding her future in his hands…and he’s not letting go.
“The Duke of Christmas Present” by Sarah MacLean
Rich and ruthless, Eben, Duke of Allryd, has no time for holidays. Holidays are for whimsy and charm–the only two things his money cannot buy. Lady Jacqueline Mosby is full of both, even now, twelve years after she left to see the world. When Jacqueline returns for a single Christmas, Eben can’t resist the woman he never stopped loving…or the future that had once been in reach. It will take a miracle to convince her to stay…but if ever there were a time for miracles, it’s Christmas…
“Heiress Alone” by Sophie Jordan
When Annis Bannister’s family leaves her behind in the rush to escape an impending snowstorm, she finds herself stranded in the Highlands, left to fend off brigands terrorizing the countryside, robbing homes locked up for winter. Her only hope falls on her neighbor, a surly hermit duke who unravels her with a look, then a kiss … until she fears the danger to her heart outweighs the danger of brigands and snowstorms.
“Christmas in Central Park” by Joanna Shupe
Women all over America devour Mrs. Walker’s weekly column for recipes and advice. No one knows Rose, the column’s author, can’t even boil water. When the paper’s owner, Duke Havemeyer, insists she host a Christmas party, Rose must scramble to find a husband, an empty mansion, and a cook. But Duke is not a man easily fooled and she fears her perfect plan is failing–especially when Duke’s attentions make her feel anything but professional. To save her career will she give up her chance at love?

Enjoy an excerpt from Meet Me in Mayfair…

Christmas just wouldn’t be Christmas this year. A cloud loomed over the Ward sisters’ bedchamber, and it wasn’t the sort that dispensed glittering snowflakes. This would be their last holiday in Mayfair. That was, unless Louisa managed to work a miracle.

Thanks to her friendship with Miss Fiona Carville, she was invited to attend the Carvilles’ lavish holiday ball. If she managed to attract a gentleman tonight, and if said gentleman was both wealthy and generous, and if he fell sufficiently in love with her to propose marriage within the next two weeks—then and only then could Louisa save this Christmas, and all her family’s Christmases thereafter.

No pressure, she thought wryly. None at all.

She drew a deep breath and regarded her half-coiffed reflection in the mirror. She couldn’t afford to indulge her nerves. Not with flame-hot curling tongs mere inches from her scalp.

“Here. Eat this.” Kat thrust a plate under Louisa’s nose.

Without turning her head, Louisa arrowed a glance at the scorched, misshapen lump of … something. A cautious sniff made her stomach turn. Her youngest sister’s experiments in baking could be downright vicious. When you took a bite, they bit back.

“It’s delicious,” Kat sang, waving the shortbread back and forth under Louisa’s nose.

“Piffle. What’s a bit of brown on the edges?” Kat whisked around her, attacking from the opposite side. She held the plate in front of her mouth and mimicked a tiny, chirping voice coming from the shortbread. “Eat me, Louisa! Eat me!”

“Let her alone, Kat.” Maggie leveled the curling tongs in warning. Although she was the middle sister, the role of family disciplinarian came naturally to her.

Unfortunately, twelve-year-old Kat took just as naturally to the part of irrepressible hellion. She was not so easily deterred.

“You must eat it, Louisa,” Kat said. “While I was packing the books into crates, I found the recipe in a moldy little collection of Scottish folklore. One bite, and every man you meet will fall in love with you. It’s guaranteed to make you irresistible.”

“Guaranteed to make me vomit, I warrant.”

“But this is our last chance,” Kat pleaded. “The whole family is depending on you.”

Really. As if Louisa needed the reminder.

Ages ago, their father had borrowed money from a generous friend—a friend who just happened to be a duke—to purchase the Mayfair row house they called home. For decades, the old duke had ignored the debt on account of their fast friendship. Then he’d died last year, suddenly and without warning, and the mysterious new Duke of Thorndale had called in Papa’s debt. He demanded not only the original amount, but also decades’ worth of compounded interest. Papa had sent letters to the Thorndale estate in Yorkshire, even swallowed his pride and visited the duke’s London solicitors…but no amount of pleading had persuaded the man to leniency.

At the New Year, this house—their beloved home—would belong to a stranger.

Kat thrust the shortbread at her again. “Just one bite. If you’re going to catch a husband at the ball, you need all the help you can get.”

She sighed. “Thank you, poppet, for your faith in my desirability.”

“Louisa would be an exceptional catch for any gentleman.” Maggie pulled a hairpin from her clenched teeth to secure one of Louisa’s chestnut-brown curls.

And yet, she silently lamented, thus far the gentlemen had failed to agree.

Louisa’s parents had raised her to believe in her own worth. She was clever, she loved to laugh, and she was pretty enough that Mama’s friends would occasionally comment on it—but she didn’t possess the kind of beauty that would make a man cross the room, much less convince him to overlook her “flaws.” She’d discouraged more than one would-be suitor with her free opinions and straightforward manner. In the Ward family, the three daughters were encouraged to read and learn and speak their minds in equal measure with their three brothers. A difficult habit to break.

Tonight, she must try.

If she could snare a wealthy husband—one sufficiently generous to pay Papa’s debts—the Ward family could remain in London. If she failed, they would be forced to leave within the month. Not to live in a charming cottage in the Cotswolds or a sleepy village in Surrey. Oh, no. They would be bound for the Isle of Jersey, of all places.

It might as well be a thousand miles away.

“I tell you,” Kat said, “this marrying scheme is balderdash. If I were the eldest, I’d be carrying out a different plan tonight.”

Maggie sighed. “We’ve discussed this. Murdering the duke is not a plan.”

“Of course it isn’t,” Kat replied. “Murdering the duke is an objective. A plan requires specifics. A concealed pistol. A hidden dagger. Poison-tipped darts.”

In retaliation, Kat gave her arm a savage pinch.

“Promise me one thing.” Maggie tied an emerald-green velvet ribbon at the base of Louisa’s neck. “If you’re invited to display an accomplishment tonight, please do not recite scandalous poetry.”

With a sigh, Louisa rose from the dressing table and moved to the full-length mirror. She corrected her posture, smoothed the ivory satin of her gown with gloved hands, and spoke to her reflection. “I will carry myself with quiet grace. I will give every appearance of a docile, compliant bride. And I vow it, I will hold my tongue.”

Kat flopped onto the bed with a groan. “We’re doomed.”

Her little sister was right. In one way or another, Louisa was doomed. She had always expected to marry for love. To be courted by a gentleman who admired her for her mind and spirit, not despite them. A gentleman whose intelligence and principles deserved her admiration in equal measure.

Someone who loved her for herself, not for what society wished her to be.

It wasn’t a duke who’d be murdered tonight, but Louisa’s own hopes of a loving marriage. And the man holding the sword to her breast was the cruel, heartless Duke of Thorndale.

Oh, how she loathed the man.

Louisa glanced at the lump of burnt shortbread. Perhaps she ought to give it a try, just in case. If some ancient Scottish superstition had even the slightest chance to save them, who was she to decline?

Before she could reach for it, however, their younger brother Harold called up from the bottom of the stairwell. “Lou-EEE-saah! The Carvilles’ carriage is here for you.”

“Try not to look so glum,” Maggie said. “It’s Christmas.”

“Lucky for us it is.” Kat propped her chin in her hand. “Because this family needs a miracle.”