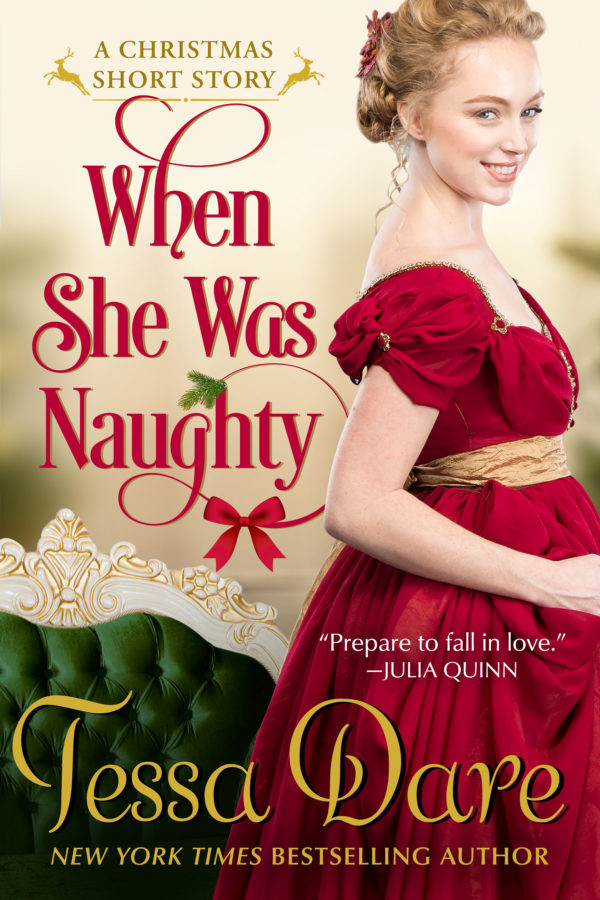 When She Was Naughty (A Christmas Short Story)

An earl who needs to come in from the cold.

All year long, Chloe Garland’s been trading witty remarks and heated glances with her nemesis, the arrogant Lord Cheverell. But when Chloe tricks him into wearing a hideous waistcoat—complete with sequins, pompoms, and jingle bells—to her family’s Christmas Eve party, she may have gone too far. Her penalty? A single, scorching kiss—and a Christmas gift she never expected.

Mama tapped Chloe’s wrist with her folded fan. “Now. Tell me what you’ve done this time.”

“Nothing so terrible. I may have invented a fictional family tradition.”

“I told Lord Cheverell that the Garland men wear holiday waistcoats to our Christmas Eve party.”

“And I told him that if he didn’t wear a Christmas waistcoat, he’d be the only gentleman in attendance without one. So if he comes tonight, expect him to appear looking…festive.”

“Oh. Is that all? For a moment, I worried you’d done something truly shocking.” Mama peered out the window. “I believe that’s his carriage in the drive.”

Chloe’s heart beat a little faster. There it was again, that delicious frisson of anticipation.

She knew the instant he entered the hall. Quiet swept through the room like a wave. To a one, the guests abandoned their drinks and gossipy conversations and simply stared.

Lord Cheverell was a vision.

The kind of vision that might result from overindulging in plum pudding and sherry, then spinning in a circle a dozen times fast.

He was handsome, of course. He was always handsome, in the most elegant, intimidating way. Tall stature, dark hair, piercing gaze, noble features sculpted by centuries of aristocratic breeding.

But tonight his fine looks weren’t the subject of attention.

It was the waistcoat. The waistcoat had everyone dazzled. Also shocked, perplexed, and perhaps a bit nauseous.

Oh, and there was no neglecting her favorite part: the tassels. Shining, swishing, drapery-sized tassels.

Chloe pressed a hand to her mouth to keep from laughing. Here it was, after weeks of waiting: the best Christmas present imaginable.

No one could be serious in that waistcoat. Not even Justin String-of-Obsequious-Middle-Names Montague, the fifth Earl of Cheverell. Once he realized he’d been made an unwitting party to a joke, the man’s impenetrable shell would have to crack. His stern demeanor must be vanquished. She expected him to bow gamely, perhaps even chuckle. Everyone would have a good laugh. They’d appreciate his sporting nature, welcome him with brandy, and this incident would become one more bit of the family Christmas lore.

No one in the room dared to laugh. Instead of softening, the earl held himself as stiffly as ever, looking over the assembled guests with a gaze so cold and penetrating, it froze the room. They might need ice skates for the dancing.

And then he locked eyes with Chloe.

She was accustomed to his annoyance or disapproval. This was different. There was something ominous in his gaze. Her whole body prickled with awareness, and her pulse thundered in her ears.

Lord Cheverell knew what she’d done. He was furious about it.

And he meant to exact revenge.