On The Ballroom Blog today, Miranda Neville has a fabulous post about Regency Real Estate, with gorgeous photographs of lavish English country estates with gardens to die for.

I must confess–her post made me laugh, because while Miranda’s hero is getting this:

Poor Bram, my hero in A Night to Surrender, is getting something like this: 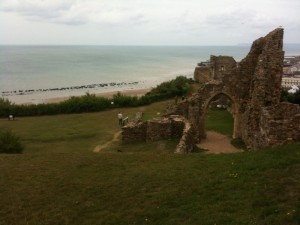 That’s Hastings Castle, one of the first castles William the Conqueror built after the Normans invaded England in 1066. In the beginning of ANTS, Bram is gifted a revived medieval earldom, which comes along with no real lands or money–just the similarly crumbling (and fictional) Rycliff Castle.

(You can click on any of these photos for a better look.)

My imaginary Rycliff Castle was mostly inspired by Hastings-especially the setting, on a cliff overlooking the English Channel. But I did feel Bram should have a bit more of a place to call home. He’s a military man and used to roughing it, but I did want him to have a bit of shelter. A standing few walls, you know, to keep out the elements: wind, rain, sheep.

So I added in a bit of this place, Ypres Tower: 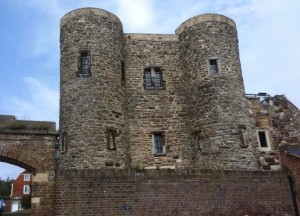 Ypres Tower was an early medieval fortress built to protect the then-bustling port of Rye. In later years, it was used as a jail. Nowadays, it’s a museum. Changes to the coastline over the centuries mean Rye is now situated a good mile or two back from the sea. So Ypres Tower looks out over farmland and delta, instead of the harbor it was constructed to protect. But it was from a historically plausible era, and it did have walls!

I decided Rycliff Castle would have a keep (inner castle) added a few centuries after its original construction, and I envisioned it something like Ypres–a cloverleaf of four stone turrets.

So now Bram had a few walls. But still…it’s not terribly romantic, now is it?

Fortunately, this place was an hour’s bus ride away: 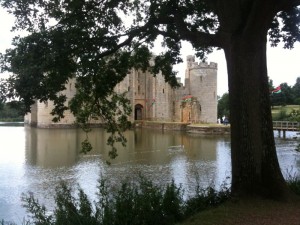 Ahhh, that’s more like it! Bodiam Castle, constructed in the late 1300s. That date puts it well after the time Rycliff Castle should have been completed, so the architecture style is a little off, but wandering the ruins was lovely inspiration nonetheless. Now I could form a nice idea of what those four stone turrets looked like from the inside. 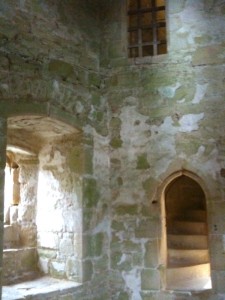 There. Nice and cozy, right? 😀 I know, I know. It’s no country estate with lavishly-appointed rooms and manicured gardens. You’d have to visit the heroine’s home, Summerfield, for that. 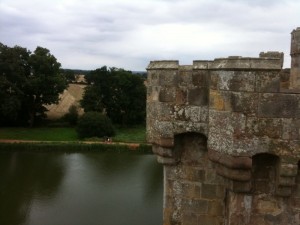 How could one not feel romantic up there, hm? Everyone knows that when it comes to castles, the ramparts are where all the action happens. Ahem. Yes. 😉

So what do you think? Which do you find more romantic, mansions or castles? Did I manage to make Rycliff Castle into suitable (temporary) digs for a Regency romance hero?

Speaking of The Ballroom Blog, be sure to pop over on Monday, when it’s my turn to blog. I’ll be chatting with Miss Susanna Finch and posting an exclusive excerpt from A Night to Surrender!