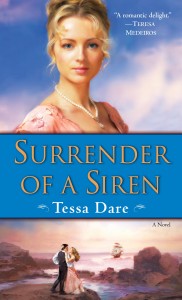 In just a few days, Surrender of a Siren, book two in my trilogy, will be hitting the shelves everywhere!

I know I’ve blogged about this book’s sentimental title–amongst friends, it’s known as “Goats on a Boat”. Why, you may ask? Well, because much of the story takes place on a boat. And because there are goats on that boat–in addition to a runaway heiress, a band of sketchy sailors, and one devilish-hot former privateer. 8)

Why goats? That has to do with shipboard provisions. An early 19th-century ocean crossing was no luxury cruise. The diet consisted of hardtack (also known as ship’s biscuit), salted meat (that often went rancid as the voyage progressed), and perhaps a few root vegetables–potatoes, onions, carrots–for the first few weeks out from land. Goats were a portable source of fresh milk, which was a welcome addition to the menu.

Here’s a link to a template and directions for making your own paper goat, should you wish to do so! (Thanks to the ever-crafty, beadazzling Sara Lindsey!)

Don’t worry–the goats don’t take over the boat, or the romance. But if you’ve been wondering what the “Goats on a Boat” references are about…now you’re in on the joke. 🙂

A pale-faced youth trotted across the deck, a thick coil of rope threaded over his arm.

“Come from the farm, have you?”

The lad shifted his feet. He regarded the goats warily. “Yes, sir.”

“Then I suppose you know how to tend a goat.”

The boy hesitated, looking toward Joss.

“Well?” Gray asked. “Do you know a goat’s teat from her tail, or don’t you?” When the boy still paused, he added, “Speak up now, or I’ll ask you the same about girls.”

“I’ve tended goats, sir. It’s just… I wasn’t expecting to tend them at sea. I rather thought I was ﬁnished with that.”

Gray laughed. “A man can’t shake his past, Davy. And don’t I know it.”

GOATS ON A BOAT

Chewing their way through bookshelves, starting Tuesday next!

9 comments to “Coming soon: Goats on a Boat!”