Congrats to Cynthia Falcon, Thursday’s winner! Email me with your snail mail addy, and I’ll give you a list of books to choose from.

Ms. Eloisa James took me for tea and scones at the beginning of the day, and she was kind enough to ask about my book. I’d never tried to pitch my book before, and let’s just say – that fact was obvious. I rambled, I hedged, I wanted to stick a coffee stirrer in my eye. But she listened very patiently and then gave me tips on how to pitch it right. Here’s some of her advice:

If you’re pitching to an editor, know the house’s line and how your book would fit in. In my case, since I have a light, humorous Regency I’m trying to sell to Avon, EJ said I should come out and say, “This is a light, humorous Regency, along the lines of Eloisa James and Julia Quinn’s books.” Okay, so just typing that sentence verges on blasphemy, but really – she said to say it. The reason is, publishing houses follow a pattern. Say a publisher brings out 10 books a month, and 3 are historicals. And of those, one is a darker Regency, and one is a romp, and one is a non-Regency historical. They need to know how the book you’re pitching fits into the pattern.

Don’t be afraid to stereotype your characters. EJ kept trying to pin labels on my h/h. “So he’s a tortured alpha,” she’d say. Me: “Well … kinda…but sorta… not.” EJ: “So she’s TSTL?” Me: “God, no! She’s smart, she just … does stupid stuff sometimes.” We get so used to playing up what makes our characters unique – but either you’ve got to be able to communicate that in a few words, or you’ve got to just give them a convenient label, so the editor/agent can get a quick handle on the h/h dynamic.

Cover the major plot points. That sounds kinda obvious, I suppose, but I’m slow that way. Unlike a written blurb or “hook,” EJ said that in a pitch, the agent or editor wants to hear that you’ve got a complete story – beginning, middle, end. Don’t be afraid of labels here, either. She would say, “so it’s a forced marriage,” and I would say, “yeah, but they’re not really forced.” But in a pitch, quibbling like that wastes time. There’s nothing wrong with saying it’s a forced marriage. A forced marriage is a tried-and-true plot device for a reason. Oh, and mention when and why they have sex. Sex counts as a major plot point. 🙂

At the end of my day at Avon, there was another ‘tea party,’ where all the people I’d met throughout the day came together to chat over lovely snacks. By this point, we were mostly just talking about life and kids and current events, but I was able to get answers to a few more questions you’d asked:

How long does it take for a book to come out, from the time it’s contracted?
Anywhere from 9 to 18 months, depending on how it fits into the schedule. 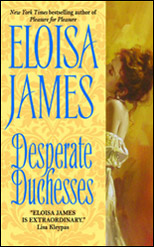 Did I miss any questions? I tried my best to remember and ask them all. The people at Avon and HarperCollins were wonderful to me, and I can’t thank them enough. Nor can I say enough great things about Ms. Eloisa James. Please run out on June 1st and buy Desperate Duchesses – you’ll have to, because I’m not giving up my signed ARC!

But I do still have some stuff left to give away – Winner today gets a hat and two books, TBA. Just leave a comment – practice describing your main characters in three words or less. If you’re not writing, use an H&H from your favorite book. My example? Hmmm. Lucy is a stubborn, reckless hoyden. Jeremy is an intense, haunted alpha.

I’ve had so much fun blogging about my trip with all of you. Thanks so much for hanging out with me all week! I’ll post today’s winner tomorrow, but then I’ll take a few days off and come back next Tuesday. I’ve decided to have a weekly “TMI Tuesday.” Next week’s topic? Kissing technique – the good, the bad, the sloppy. I ‘m on a mission to make the kisses in my next book rockin’ hot – so come back next Tuesday to swap some spit!

33 comments to “Tea and Sympathy – Day with Avon, Part Five”

« The Wicked Game of Marketing – Day with Avon, Part 4

Thanks for a great week! »