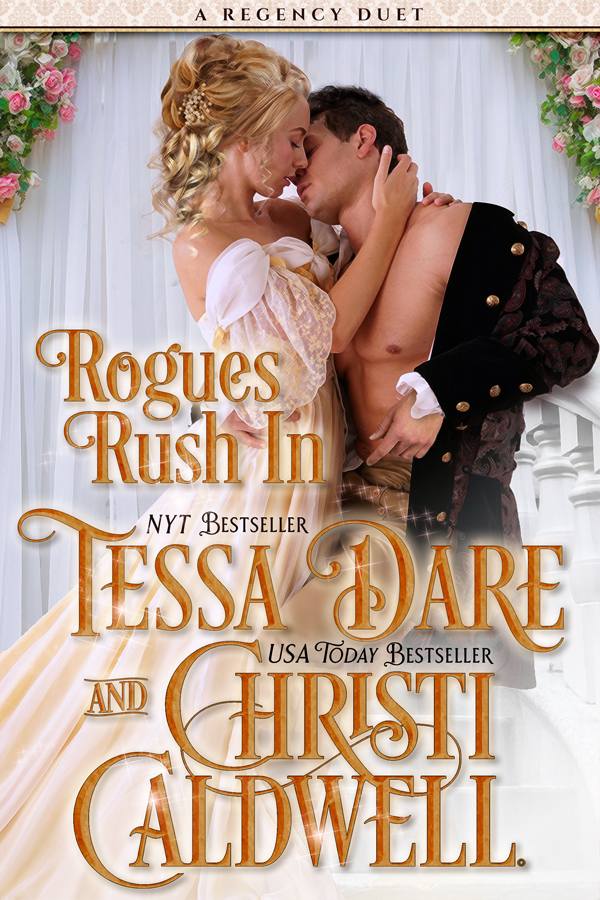 Rogues Rush In
A Regency Duet

Note: Tessa’s novella, His Bride for the Taking, is now also available separately.

It was never meant to be…
That’s what Elizabeth Terry has told herself while trying to forget the man she married–her once best friend. Passing herself off as a widow, Elizabeth has since built a life for herself as an instructor at a finishing school, far away from that greatest of mistakes. But the past has a way of finding you, and now that her husband has found her, Elizabeth must face the man she’s tried to forget.

It was time to right a wrong…
Crispin Ferguson, the Duke of Huntington, has spent the past years living with regret. The young woman he married left without a by-your-leave, and his hasty elopement had devastating repercussions. Despite everything, Crispin never stopped thinking about Elizabeth. Now that he’s found her, he has one request—be his duchess, publicly, just for a day.

Can spending time together as husband and wife rekindle the bond they once shared? Or will a shocking discovery tear them apart…this time, forever?

It was the first rule of friendship among gentlemen: Never, ever lay a hand on your best friend’s sister.

Don’t do it. Don’t even think about it.

Sebastian Ives, Lord Byrne, had never been one for following rules. But promises? He took those seriously indeed. His friendship with Henry Clayton had been the anchor in his turbulent youth, too valuable to risk. So he’d made a vow to himself, and he’d steadfastly held to it—as best he could, anyhow—for years.

Well, from there the specifics varied.

Suffice it to say, aside from the casual contact necessitated by social convention, he’d never touched her—with one exception. After Henry’s funeral, he’d held her for hours as she wept. That didn’t count, surely.

But today, Sebastian found himself tempted to break his promise. No, “break” was too weak a word. He wanted to bundle his principles, snap them in two, and grind them to sand beneath his boot.

Damn, she looked lovely in her wedding gown.

Not only lovely, but inexplicably alone.

“Where the devil is your groom?”

He paced the floor of the chapel’s tiny annex, averting his gaze from the slope of her neck and the gentle curl of auburn hair that adorned it. “How dare he keep you waiting, the bastard.”

“Mr. Perry’s not a bastard. He’s the legitimate son of a barrister.”

“I don’t care if he’s the Prince of Wales. The man made a promise to you, and he’s not here to keep it. That makes him a bastard. A tardy bastard, at that.”

“It’s quite possible. In fact, it’s evident. He’s not here, and neither is his family.” She released her breath in a defeated sigh. “He must have changed his mind at the last moment.”

“Changed his mind? What sort of idiotic milksop would change his mind about marrying you?”

“One who wanted a different sort of wife, I suppose. Someone less opinionated, more amenable. You of all people know I can be difficult.”

Difficult? When it came to Mary, his only difficulty had been keeping his distance.

He supposed he could see why a weaker man might find her intimidating. She’d always been more clever than Sebastian and Henry put together. She was strong and self-reliant, because losing her mother at a young age had given her no other choice.

And she was passionate. If she believed in something, she would argue her case with everything she had, and never back down. She believed that women should have the vote, that prisoners should have better rations, that war widows should have pensions.

And that sons of violent drunkards should never spend Christmas alone.

Any man who’d let her go was a bloody fool.

“It’s done,” she said. “I’ll have to find the curate and tell him the wedding has been called off.”

“Oh no, you won’t. I’m going to go out and find that blackguard and drag him here.”

“I don’t want to marry a man who needs to be dragged to the altar. Even in my current state of bruised pride, I think I deserve a bit better than that.”

“Of course you do. You always deserved better than Giles Perry in the first place. But he proposed to you, and you accepted him. And I’ll be damned if he’ll get away with this.”

He relented. “Very well. I won’t drag him back. I’ll invite him to make good on his word to you.”

“And if he doesn’t accept that invitation?”

Sebastian stopped pacing and turned to her, staring directly into her brilliant blue eyes. “Then I’ll call the bastard out.”

He gave her the classic Sebastian look, commanding and stubborn in equal measures. She’d watched grown men wither under that glare. It didn’t help that he was built like a Viking warrior, tall and broad-shouldered, with features struck from bronze. There was nothing soft on him, anywhere.

Not on the outside, at least.

“You don’t know everything, Mary.”

“I know I’ve watched you cradle a sparrow hatchling in your hand and feed it from a tincture dropper.”

He tipped his head back and groaned. “That was ages ago.”

“Rescuing the thing was not my idea. It was Henry’s.”

“But you were the one who saw it through. The dear little bird thought you were its mother. Remember?” She hooked two fingers and skipped them up his arm. “Hop, hop, hop…”

She withdrew her hand. “I’m just saying that if you ever had any hope of intimidating me, it disappeared that summer. So don’t even think about dueling. You’re not a man who’d kill another in cold blood.”

“Your honor must be defended. Perry’s already put off this wedding twice.”

“He put off the wedding once,” she corrected. “The other time I was in mourning. That wasn’t his fault.”

“No, that wasn’t his fault,” Sebastian said in a low, bitter voice. “It was mine.”

Mary silently cursed herself. She never should have mentioned it. “You must stop blaming yourself. It was war; men die. You weren’t responsible for Henry’s decision to enlist.”

“Perhaps not. But when he was killed, I became responsible for you.”

“I’m nearly twenty-eight years old. I should think by now I’m responsible for myself. And I may have been jilted, but I’m not heartbroken. Giles and I held each other in esteem, but it wasn’t a love match. I’ll survive.”

“Yes, but your reputation will not. You know the things people say when a long engagement is broken. They will assume that you’ve… Well, that the two of you…” He churned the air with one hand. “Help me here. What’s a polite way to say it?”

Mary was suddenly curious about the impolite ways to say it. But that wasn’t a conversation for the moment. “They’ll assume we anticipated the wedding vows.”

“I can’t help it if people gossip.”

“You’ll be ruined. You don’t have the money or connections to overcome even a hint of scandal. If you don’t marry Perry today, you might never wed anyone at all.”

“I’m aware of that.” Painfully so.

Spinsterhood wasn’t an especially appealing prospect—not only because she’d always dreamed of falling in love, setting up house, and having children—but because with Henry gone, the modest family fortune had passed to a third cousin. Thus far, her cousin had been both sympathetic and generous, but should he change his mind, her financial situation could quickly turn grim.

“And what about your political causes and all those charitable organizations?” he asked. “I know how important they are to you. If you lose your good reputation, you’d lose a good measure of influence, too.”

Yet another blow, and one that struck nearer her heart.

She shrugged, trying to appear nonchalant. “Perhaps I’ll have to surrender my membership in the Ladies’ Social Justice Society. The meetings were rather a bore, anyhow.”

“I’ll take care of this,” he said. “Once I have him staring into the end of my pistol, he’ll reconsider. Don’t worry.”

Don’t worry? The only emotion she could feel at the moment was worry. The chances of Giles killing Sebastian in a duel were slim, but they weren’t nonexistent.

“Sebastian, I won’t let you risk your life for me. Not over this.”

“I’d give my life for you. Without a moment’s thought.”

Goodness. For once, she was caught without a response. He’d taken her breath away. She’d already lost her father, then her only brother.

Mary couldn’t bear to lose him, too.

“Listen to me. I’m not going to wed Giles. Ever. Even if you found him, reduced him to pleading at gunpoint, and brought him back to this chapel within the next quarter-hour, I would refuse. Do you mean to threaten me with a pistol, too?”

“Well, then. That’s settled. Spinsterhood it shall be.” She steadied herself. “If you’ll excuse me, I’ll go explain to the curate.”

He caught her by the arm. “No, I will not excuse you. You will not go explain to the curate. You will not be ruined, and you are not going to be a spinster, either. You’re going to marry me.”