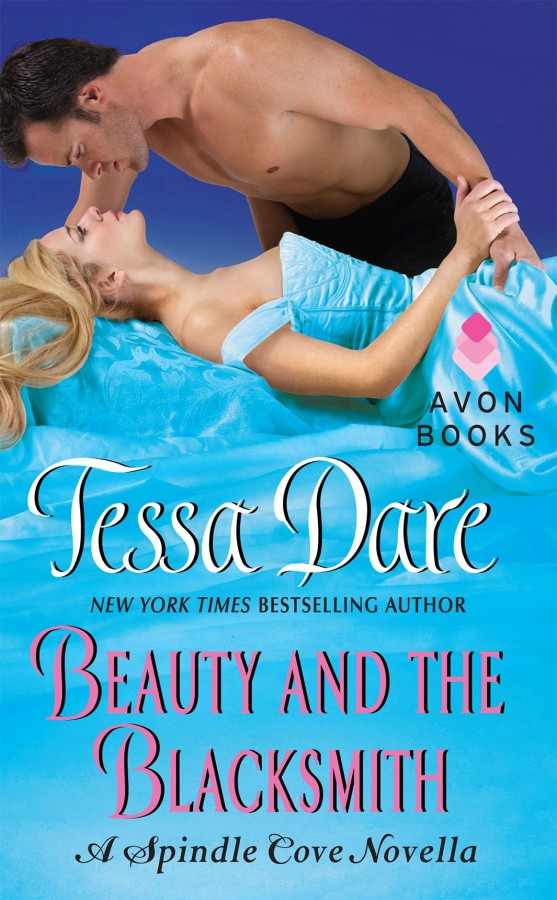 Beauty and the Blacksmith

At last, Diana Highwood gets a romance of her own! But with the last man anyone in Spindle Cove expects…

Beautiful and elegant, Miss Diana Highwood is destined to marry a wealthy, well-placed nobleman. At least, that’s what her mother has loudly declared to everyone in Spindle Cove.

But Diana’s not excited by dukes and lords. The only man who makes her heart pound is the village blacksmith, Aaron Dawes. By birth and fortune, they couldn’t be more wrong for each other…but during stolen, steamy moments in his forge, his strong hands feel so right.

Is their love forged strong enough to last, or are they just playing with fire? 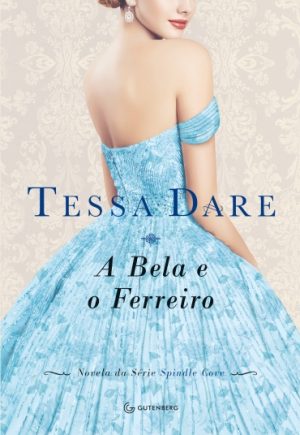 “Charming, smart and sexy, BEAUTY AND THE BLACKSMITH made me fall in love instantly.”
Fresh Fiction

“This classic story of love across the social divide matches two characters who are strong and compassionate in their love for each other. A great title for Regency romance readers.”
Library Journal

“…What a clever, hilarious tender and sexy romance! I devoured it and was so disappointed when it was over!”
Rogues Under the Covers

“Heartwarming with realistically portrayed characters, BEAUTY AND THE BLACKSMITH is another great read from Tessa Dare.”
The Romance Reviews

Goodness. Just look at it. Thick as my ankle.

Diana Highwood took her glove and worked it like a fan, chasing the flush from her throat. She was a gentlewoman, born and raised in genteel comfort, if not opulent luxury. From an early age, she’d been marked as the hope of the family. Destined, her mother vowed, to catch a nobleman’s eye.

But here, in the smithy with Aaron Dawes, all her delicate breeding disintegrated.

How could she help staring? The man had wrists as thick as her ankle.

As always, he wore his sleeves rolled to the elbow, exposing forearms roped with muscle. He pumped the bellows, commanding the flames to dance.

Broad shoulders stretched his homespun shirt, and a leather apron hung low on his hips. As he removed the glowing bit of metal from the fire and placed it on his anvil, his open collar gaped.

“Behave yourself,” he said.

The words startled her breathless.

He knows. He knows. He’s realized that refined, perfect, gently bred Miss Highwood comes to the smithy to gawp at his brute manliness. Behave yourself, indeed.

“That’s it.” Perspiration glistened on his brow. With a steady hand and a low, rich baritone, he finessed the broken clasp. “Be good for me now.”

Diana turned her gaze downward, focusing on the floor. Neatly swept and fitted stones paved her half of the smithy, where visitors waited for their work. The ground around the forge was packed with black, smudgy cinders. And the border between the two could not have been more stark, or more meaningful.

Here was the division between customer and smith. The line between the world of a gentlewoman and a working man’s domain.

Oh, goodness. She could look away from his thick forearms and his muscled chest. But that voice.

She gave herself a brisk shake. Time to put a stop to this silliness. She was a grown woman, turning four-and-twenty this year. It was surely no sin to admire Mr. Dawes. He was an admirable man. However, she ought to concentrate on the many reasons that had nothing to do with carnality.

The Highwoods had come to this seaside village for Diana’s health, but she’d come to think of Spindle Cove as home. During their stay, she’d learned a great deal about rural life. She knew a good village smith was indispensable. He shoed the farmers’ draft horses, and he mended the oarlocks on the fishermen’s boats. When neighbors were ailing, he pulled teeth and set broken bones. The nails struck on his anvil held the whole village together.

This forge was the glowing, iron heart of Spindle Cove, and Aaron Dawes was its pulse. Strong. Steady. Vital.

Now her eyes were fused to that forearm again.

“This weather,” she said, trying to change the subject. “It’s been a dreadful March, hasn’t it?”

He grunted in agreement. “Near a fortnight now without sun.”

He plunged the heated metal into a waiting bucket. A cloud of steam rose and filled the smithy, curling the short hairs at the nape of her neck.

“That should do,” he said, examining the cooled clasp of her necklace. He polished it with a scrap of cloth. “Let’s hope it lasts this time.”

Diana gave him a nervous smile. “I do seem to have bad luck with it, don’t I?”

“This is the third time it’s broken this year, by my count. You must think my craftsmanship is faulty.”

“Careless? You?” His gaze locked with hers from across the smithy, dark and intense.

She caught him looking at her like this sometimes. In church, around the village. She didn’t know what to make of her reaction, but she couldn’t deny it was a thrilling sort of confusion.

He mopped his brow and neck with a damp cloth, then wiped his hands clean. “It’s a curious thing, Miss Highwood. You don’t strike me as the clumsy sort.”

She shifted on her seat, uneasy.

She watched as he threaded the tiny vial back on its chain. In the vial was a tincture of shrubby horsetail. She kept a dose with her at all times, in case of a breathing crisis.

“You’re right.” Despite her accelerating pulse, she forced an easy smile. “I should be more cautious. I will be, in the future.”

He walked behind her and placed the chain about her neck, standing close to do the clasp. If she’d been flushed already, now she was enflamed. It was as though he’d soaked all the heat up from the fire, and now he gave it to her. Soothing and melting all her knotted places. Like the heated brick she took to bed when she had her courses.

Oh, Lord. The last thing she needed right now was thoughts of bed. Much less this big, solid brick of masculinity sharing it.

“Still don’t know how you managed to smash it like that,” he said.

By slamming it in a drawer. And finishing the deed with a rock.

“I don’t know, either,” she prevaricated. Her heart thumped wildly in her chest.

“I could almost believe someone did it on purpose. I know accidents happen. But they don’t usually happen the same way twice.”

As he fastened the necklace, his fingertips brushed her neck.

Diana sucked in her breath. She wanted to pretend the touch was an accident. As he’d said, accidents happen.

But they didn’t happen the same way twice.

He caressed her neck a second time, his roughened thumb sliding down the soft skin at her nape.

“I wonder about it. Why you come so often. Why every metal latch and clasp and rivet you possess seems to need mending of late.” His voice grew deeper, almost dreamy. “I’ve told myself you’re just bored with this village. With this weather, there’s little else to do.”

He circled her, running his finger beneath that chain. Branding her with a necklace of his touch.

“Other times”—she caught a wry note in his voice—“I decide you’ve been sent by the devil to torment me for my sins.”

He came to stand before her, holding that vial that dangled from her necklace. He pulled gently, and she swayed toward him. Just an inch.

“And then sometimes I think maybe … just maybe … you’re hoping for something to happen. Something like this.”

My pal Sara Lindsey made this adorable badge! Feel free to save, pin, share as you please! 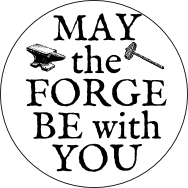 Other Books in the "Spindle Cove Series" series 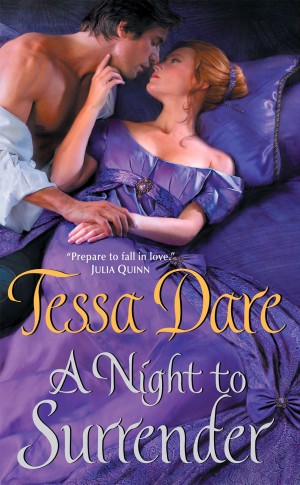 A Night to Surrender 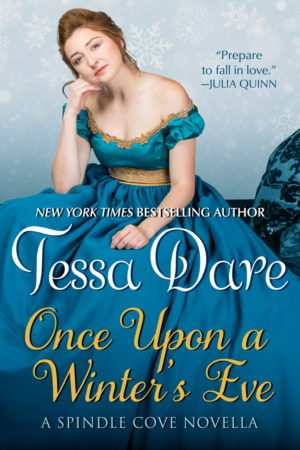 Once Upon a Winter’s Eve 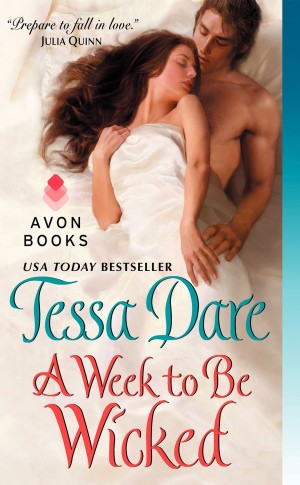 A Week to be Wicked 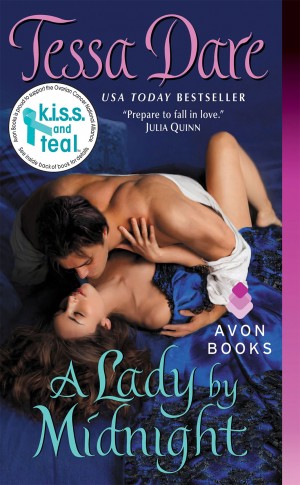 A Lady by Midnight 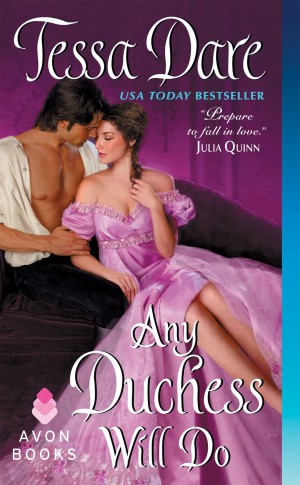 Any Duchess Will Do 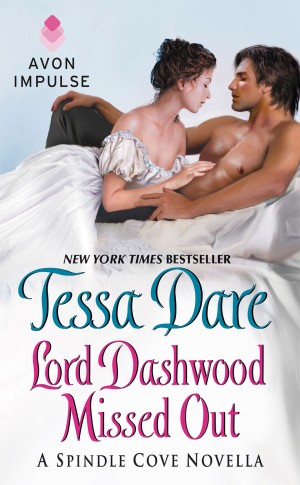 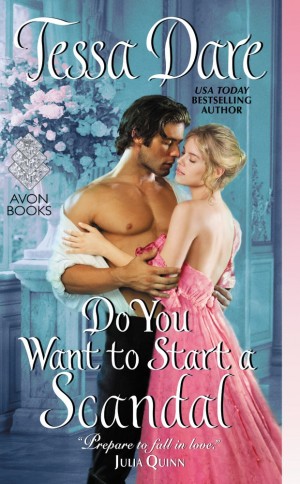 Do You Want to Start a Scandal 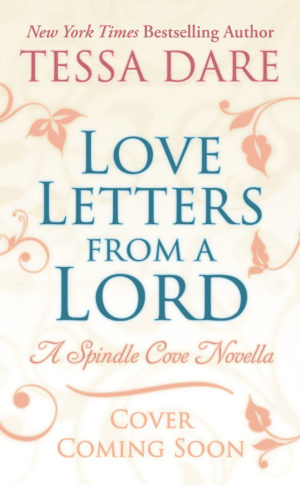 Love Letters from a Lord